Using geology as inspiration and source material, four artists look at mining of resources, environmental systems, human impact, the history of fossicking and the collection of minerals.

Find out more about our history

Underground was produced In partnership with NSW National Parks and Wildlife Service Blackheath and in association with the Australian Fossils and Minerals Museum, Bathurst.

When I was five my grandmother gave me a tiny gold rickshaw. It was the size of a pea and so intricate that the wheels turned and the canopy lifted up and down - to it me is was magical. This magic comes from the crafted, the rarified, it comes from the miniaturisation of a known thing, a tiny thing belonging to a tiny world that I held in my hand. Golden tiny shiny things like my rickshaw derive from the underground, they are geology, they are earth and stars too. When they became crafted things their thingy-ness is severed from geology. They become packaged within labour, within economic value, within status, within desire and so on. I am replicating golden tiny shiny things - my things are crafted from plastic, they are gold fakery, forgeries that could have been, but are not  ‘the real thing’. Yet, they are from the same geology, the same earth and stars, the same underground that my rickshaw is from - for even after the craftification, the rarifaction, and miniaturisation they all reside within ecology.

From an early age I fossicked for and collected rocks and minerals and was obsessed with the geological nature of our planet. This has morphed over the years into a ceramic art practice that utilises the same compounds and delves into the nature of them and our relationship to them. Humans are ostensibly walking talking minerals. Elements forming compounds are part of a collective conscious universe. Underground gives me an opportunity to examine ideas that interest me greatly.

Inspired by our eclectic collection of rocks and minerals we worked with textiles, photography and collage to explore underground landscapes both real and imagined. Rocks & minerals are suggestive of the powerful forces and immense timelines that shape the world and sit in contrast to the transience of human lives. By using adornment to signal our group membership and solidarity with the mineral world we become amorphous beings with porous boundaries and the ability to mingle corporally with air, mineral and world. We explore the idea of petrifying - changing organic matter into a stony concretion by encrusting or replacing its original substance with calcareous, siliceous, or other mineral deposits. There is a consideration of the human experience in the context of deep time and communion with elemental forces as a way of coming to terms with the absurdity and enormity of timescales that are hard to comprehend. It can be difficult to express, but you know when you see a mineral that speaks to you.

This modern paraphrase of the second verse of the hermetic writing on the ancient Emerald Tablet from the early ninth century provides me with a starting point for introducing this fantastic exhibition.

The works in this exhibition all engage with some form of transmutation, using an artistic approach to Petrology as their starting point, the branch of geology that studies rocks and the conditions under which they form. These three bodies of work can be aligned to Petrology's three classifications where the slow processes of the sedimentary sit alongside the heavy chemical ones in the metamorphic and the igneous. These artists go on to explore a range of approaches to art-making that link the ancient arts to the contemporary world.

"As above, so below" is widely regarded by medieval and early modern alchemists as the foundation of their art and provides the instructions for creating the philosophers' stone or chrysopoeia. Also known as the Magnum opus, this refers to the alchemical term for transmuting base materials or prima materia to gold. It has been used to describe personal and spiritual transmutation in the hermetic tradition. Attached to elaborate laboratory processes and chemical colour changes, it was used as a model for the individuation process and as a device in art and literature.

Marie Louise Von Franz, a student of Carl Jung, writes in her book Alchemical Active Imagination, I quote: "Western alchemy, in the narrower sense of the word, had two parents: on the one hand Greek rational philosophy or, you could say a nature philosophy and on the other Egyptian technology combined with Mesopotamian astrology. The Greek philosophers— (I refer here mainly to the pre-Socratic Greek philosophers such as Empedocles and Heraclitus) introduced rational thought into their concepts regarding the problems of nature, matter, space, and time — but made very few or no experiments. Their theories are bolstered by certain observations, but it never occurred to them actually to experiment. By contrast, in Egypt, there was a highly developed chemical-magical technique, but in general, the Egyptians gave it no thought, either philosophical or theoretical. This technique was simply the handing down by certain priestly orders of practical recipes together with magic religious representations but without theoretical reﬂection. When the two trends of Greek and Egyptian civilisation came together, they united in a very fruitful marriage, of which alchemy was their child".

Marie Louise Von Franz goes on to note that Alchemy's exploration of transmutation is characterised by the internal and the external work; I quote, "the process of psychological development is analogous to the stages in the alchemical transformation of base matter into gold the philosopher's stone."

Simon Reece's works are born of fire, recalling the igneous process and classification. All his artworks employ a gold or platinum lustre, a ceramic technology that has its roots in ancient Egypt and English teacups, with titles such as Large Golden Piece - cosmik debri - neutron waste. These exotic works are comprised of earthly clay and materials that have arrived courtesy of a supernova and are reapplied to the surface of the clay with a similar process. If I understand the process of lustring correctly, it is similar to the process known as sublimation in alchemy, the operation pertaining to air. It turns the material into air by volatilising and elevating it. A chemical process by which a solid, when heated, passes directly into a gaseous state. The result in this work is gold and platinum objects that will not tarnish or oxidise on our oxygen-rich planet. Reminders of our earthly links with the eternal and the cosmic.

The sedimentary nature of Vicky Browne's gilded gold objects in the artworks After the Gold Rush and Titling Minerals see many tiny golden shapes coalescing in the cracks and fissures of the sandstone building. But the gilding is not only in the golden surface but also in the titling of each of the pieces. Here, the transformation of base materials to gold is done through conceptual art and speculative thinking. These layered metaphysical objects transform through imagination and association. Alchemy defines imagination as the star within, and objects and thoughts can be given form and power in this process. We can be healed or infected by the germ of an idea. The precious thought is activated by the imagination. But like the period known as the Gilded Age, where gross materialism gave rise to social and political criticism, the open and often humorous titles ascribed to the minerals/objects in this work subtly critique our desire for minerals to be 21st-century panaceas.

The metamorphic process or metamorphism features in Paul Mosig and Rachel Peachey's work where the body is physically transformed, mineralised, or crystallised. Here the psychological transformation is wrought tangible. In the photographic work Fall of land, the transmutation is expressed as the head and face becoming iron pyrites or fool's gold. Like one of the old alchemical Images that functioned as a recipe or instructions for the metallic transmutations and other alchemic processes, each element in this image is rich with symbolic weight. The mineralisation of the face, the waterfall coming from the mouth and a gold band around the neck. An invitation to decode.

Similarly, in the photographic artwork, Turn me to stone, the great opposites of human nature, extraversion and introversion, manifest. The tension between the two plays a significant role in the history of alchemy. Resulting in some alchemists presupposing that the answers they were looking for were not in the material world outside of them but in themselves. In their own bodies and in that part of their personality, we call the unconscious.

Finally, I would like to congratulate and thank all the artists for their beautiful and thoughtful works and Miriam's insightful curation.

2. von Franz, Marie-Louise. Alchemy: An Introduction to the Symbolism and the Psychology Studies in Jungian Psychology; 5, Inner City Books, 1980 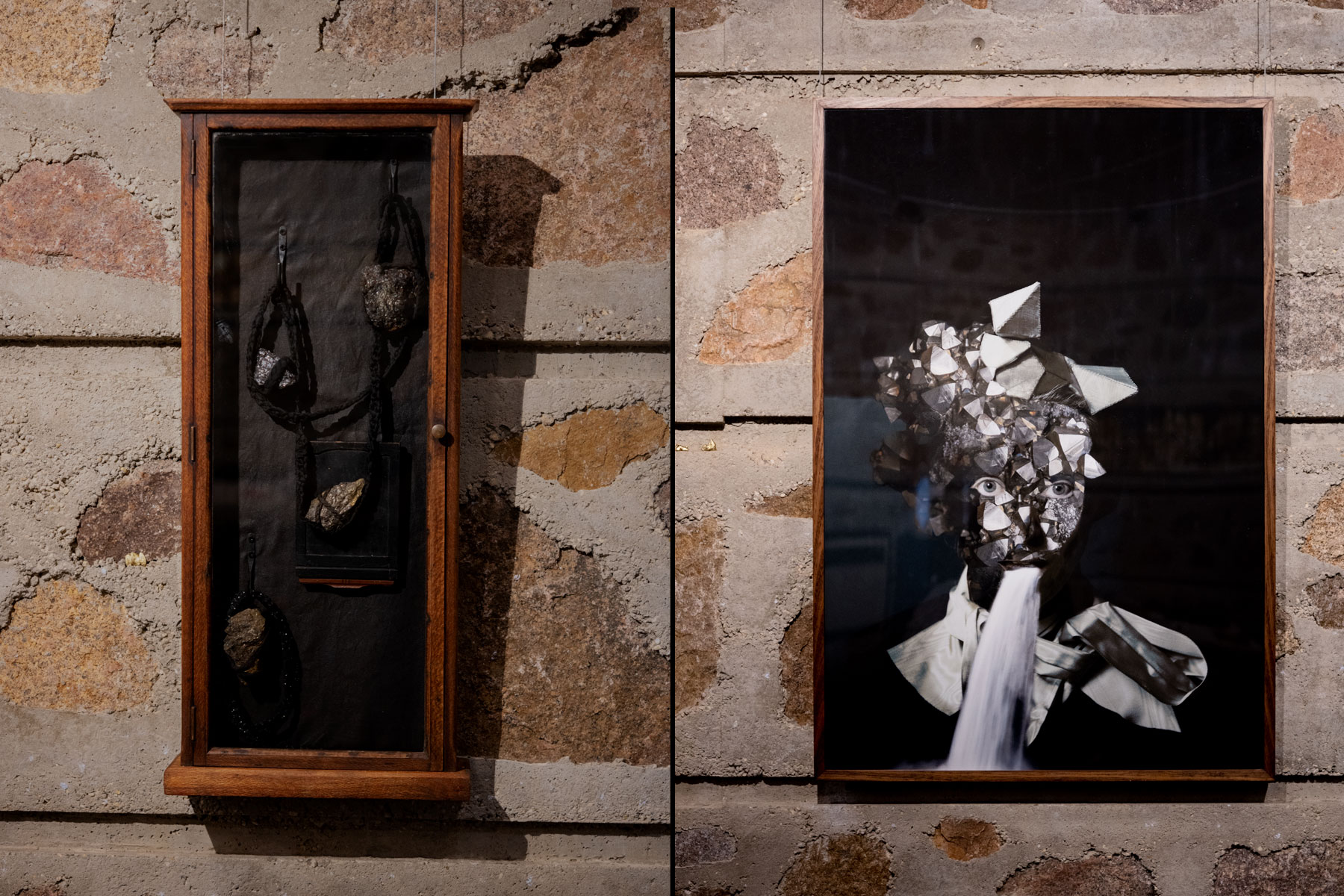 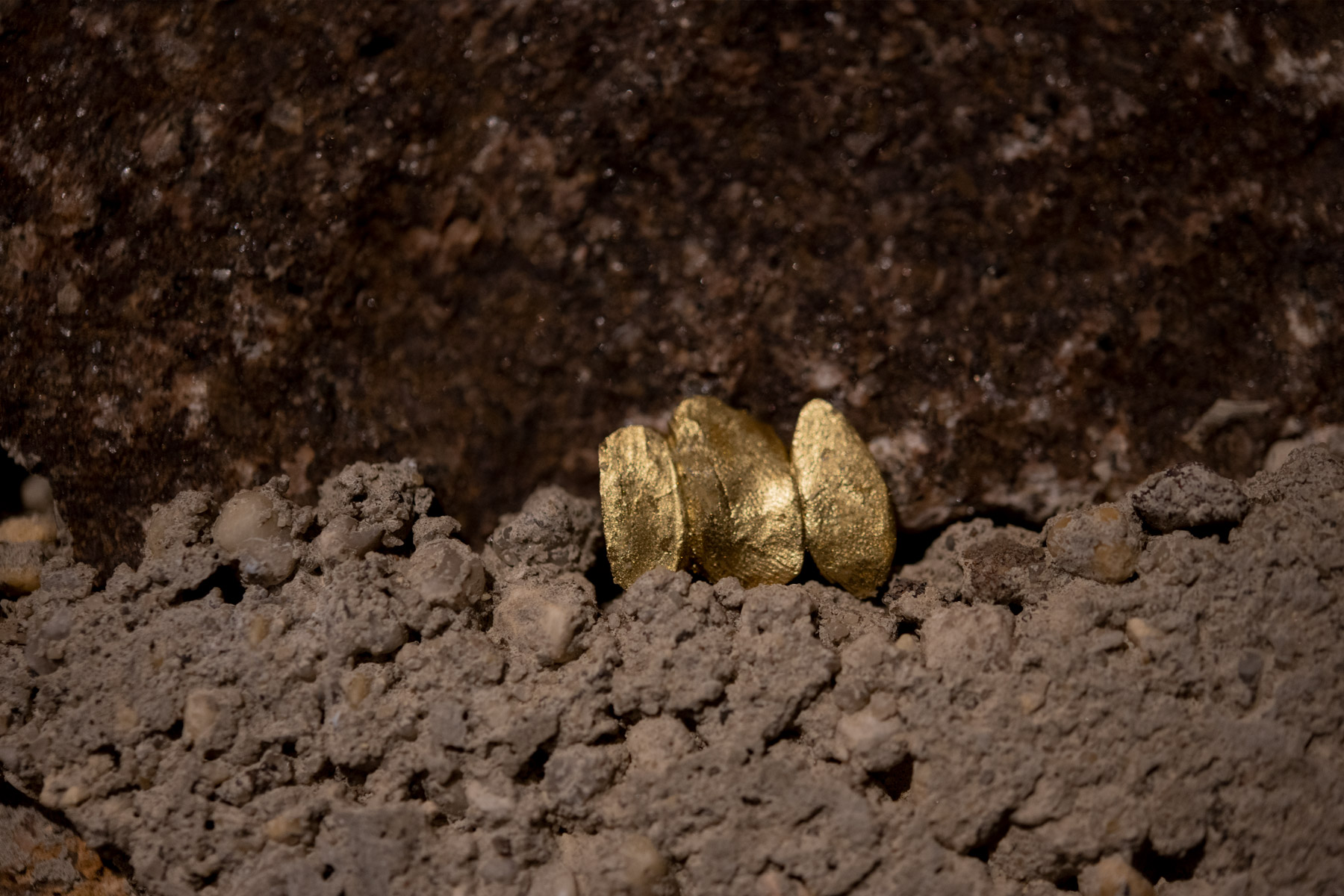 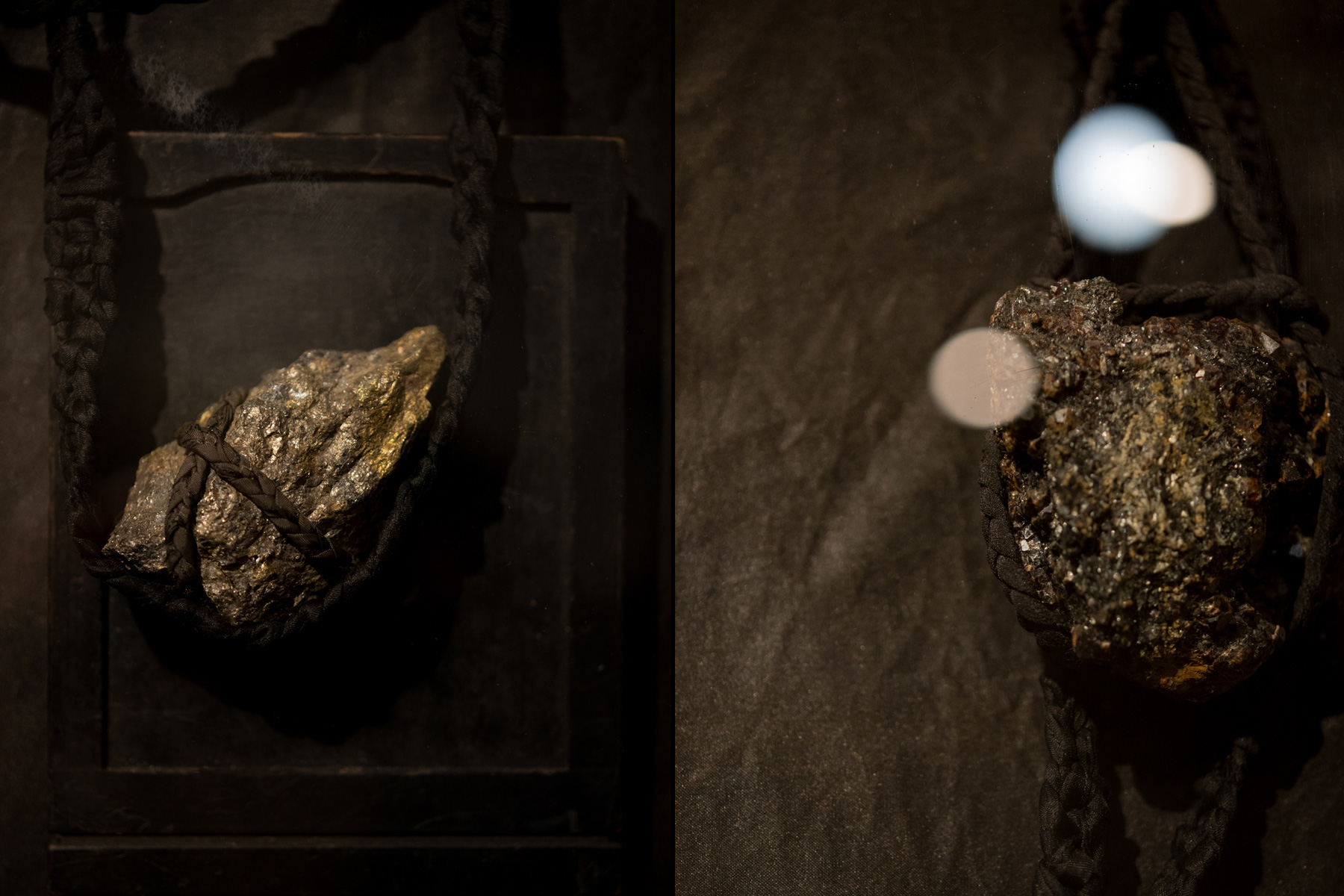 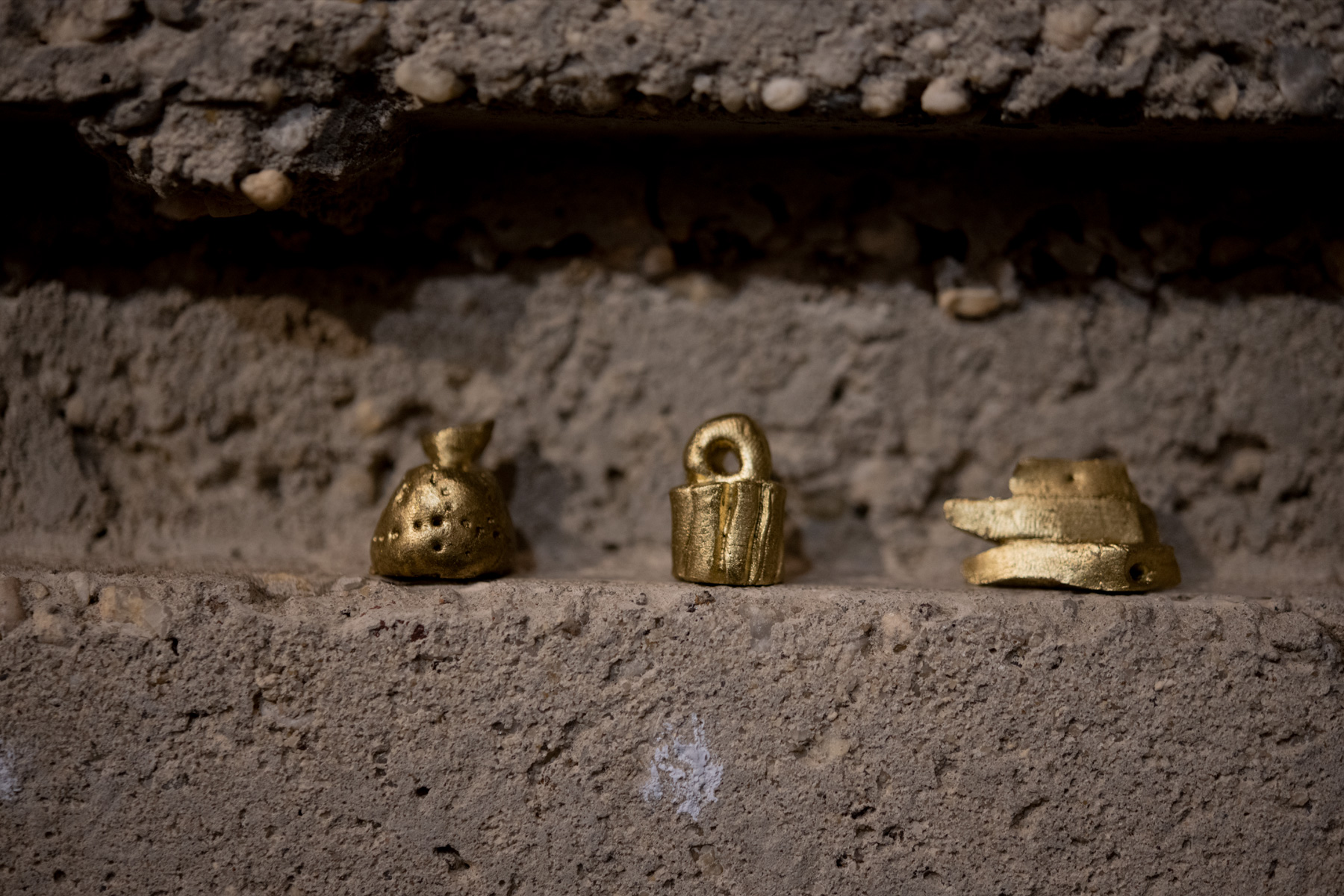 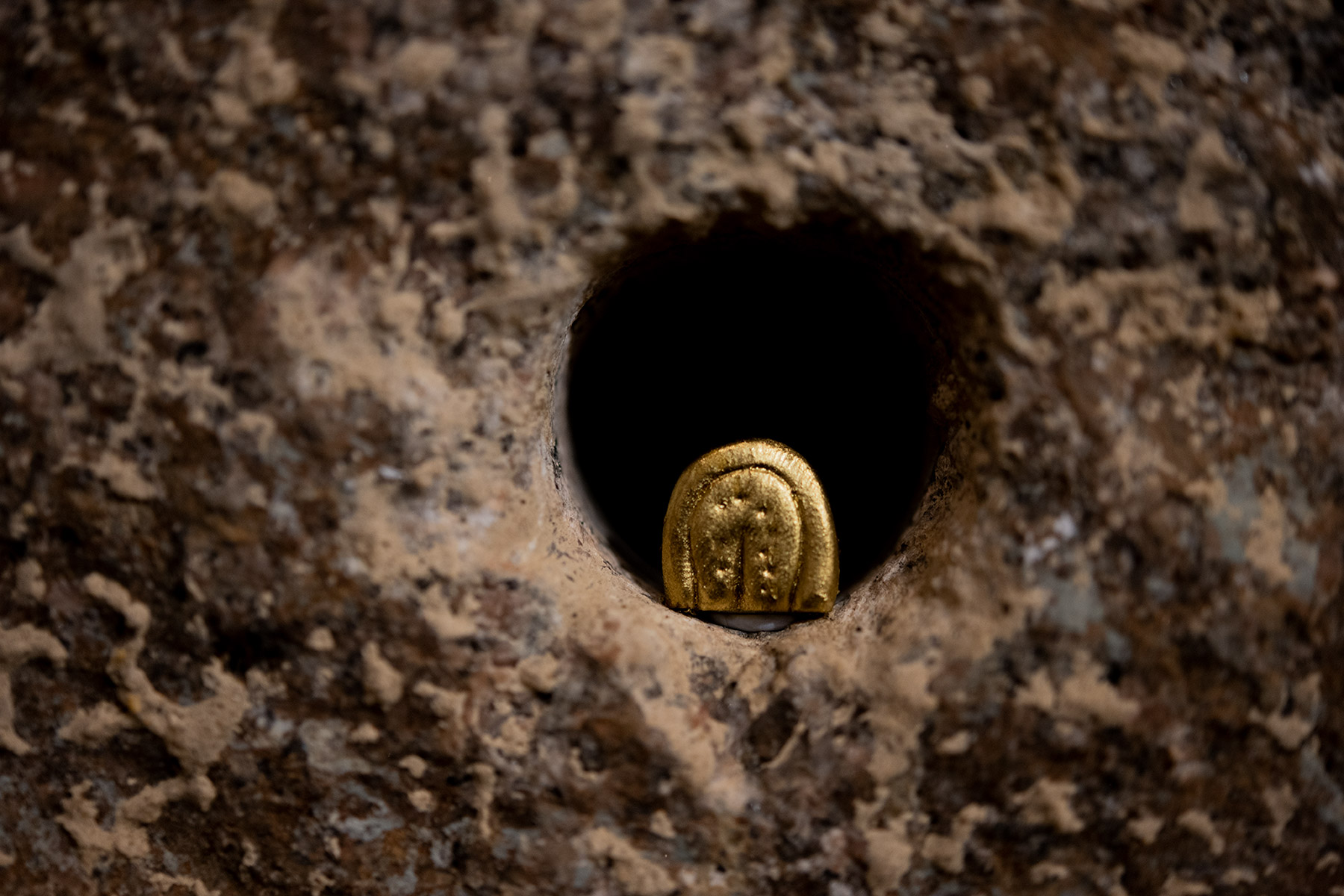 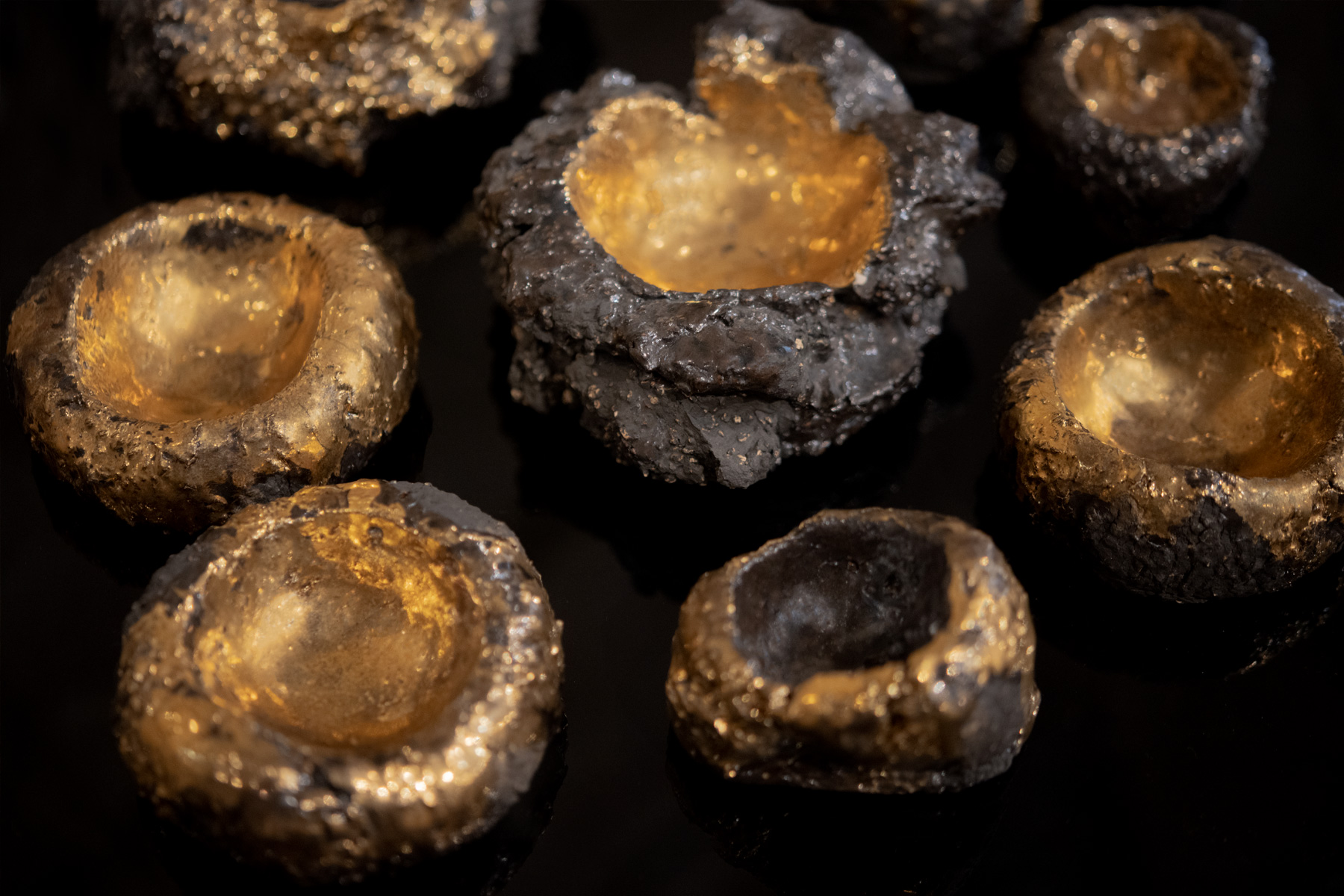 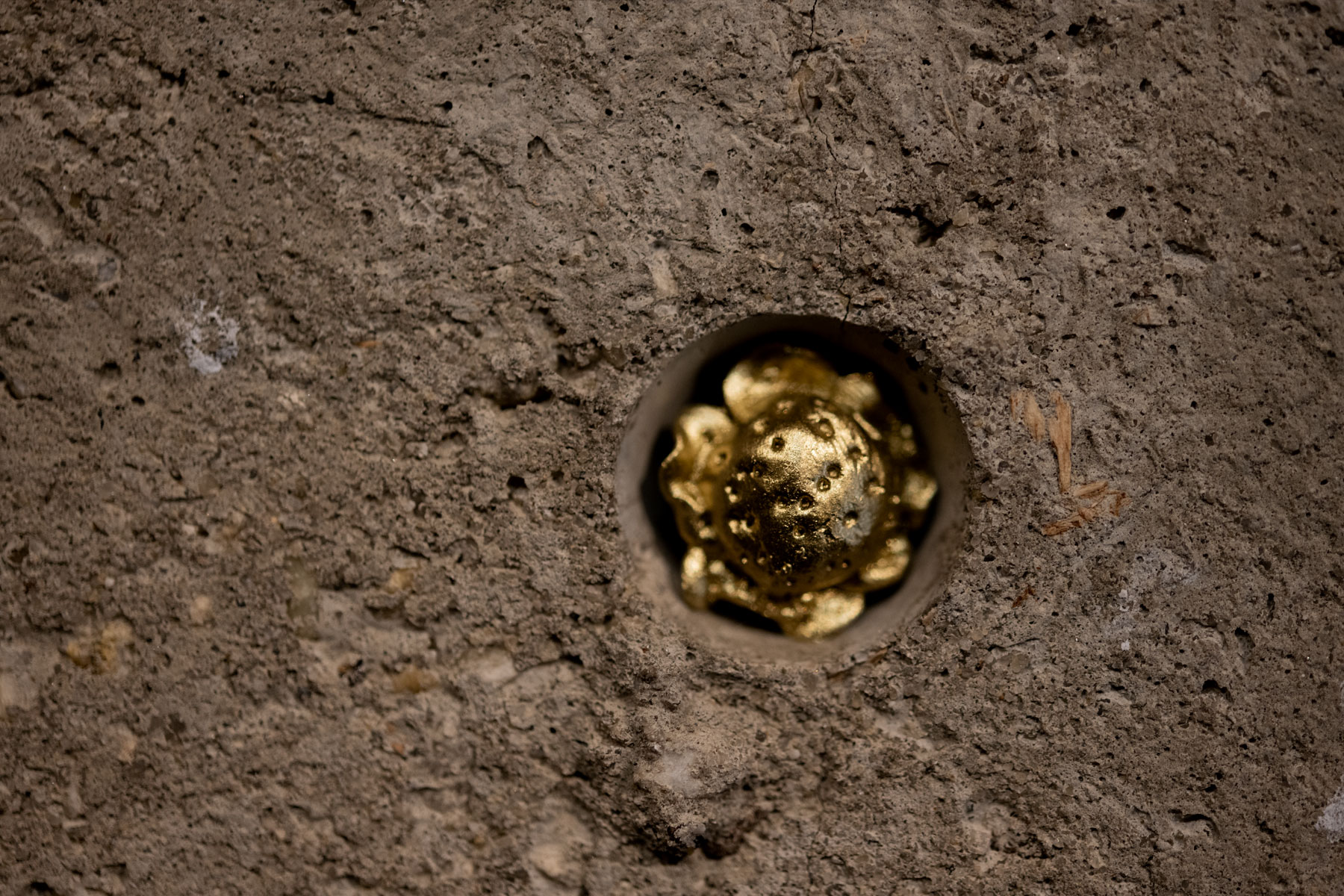 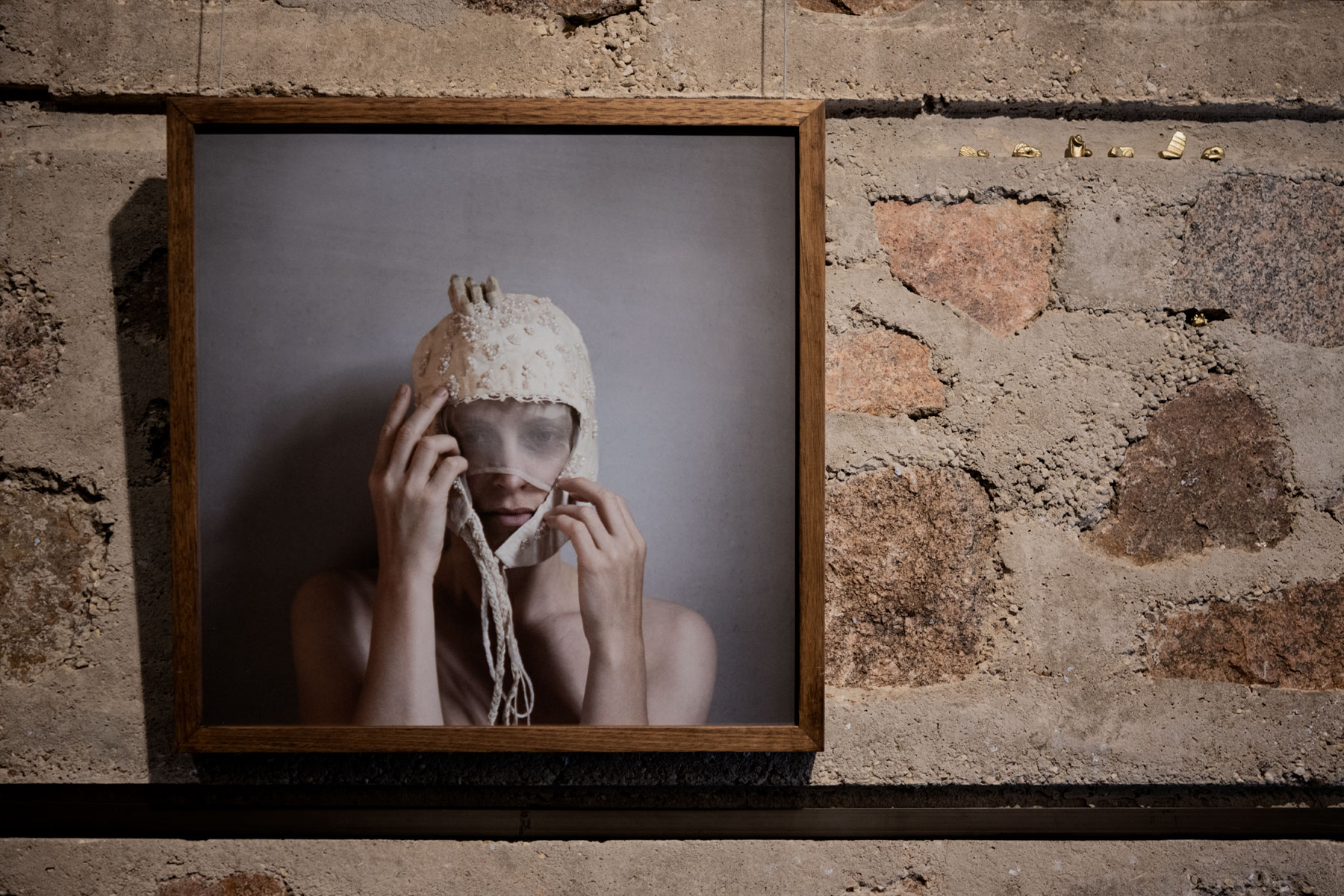 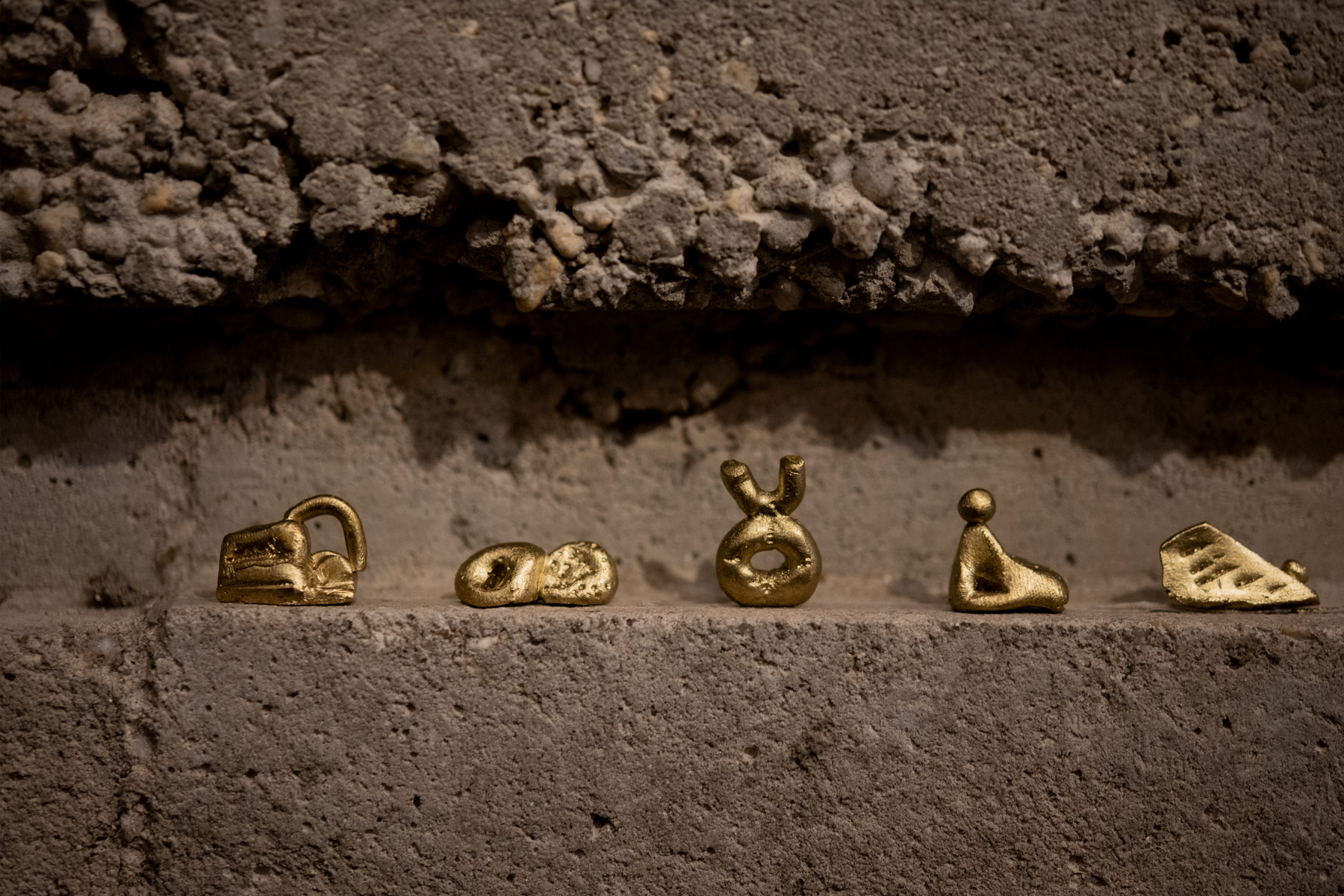 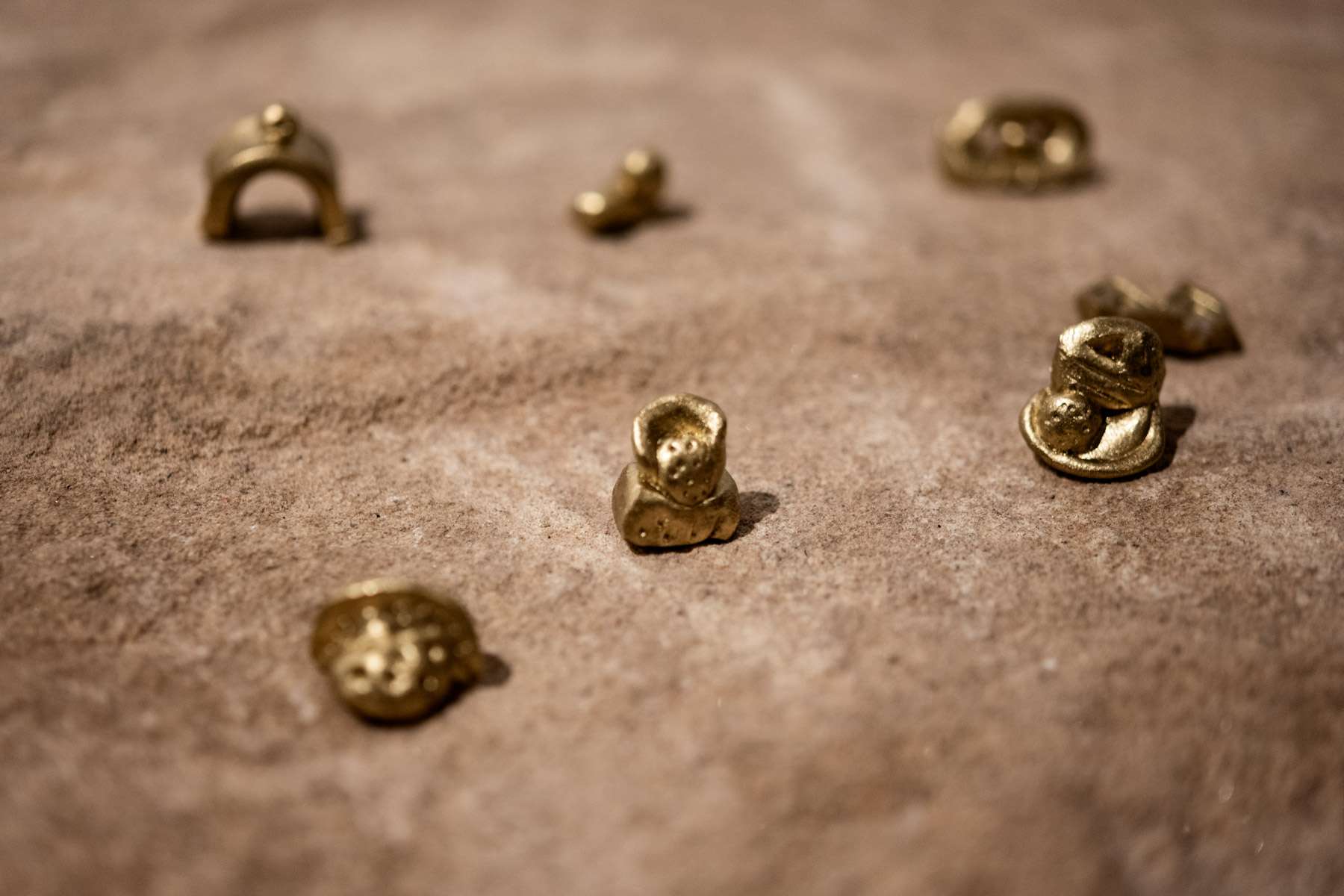